I was avoiding a year-end post because this year has been so crappy for us: my cancer, Lou's circulation problems, the ongoing issue of aging parents, and yesterday, the putting down of our beloved, LuLu. We had her for 16 years, and though Lillian was her "girl", she was still my dog, too. It was a tough day for all of us, especially as Lou is in Cleveland, and the vet couldn't come to the house, we had to take her in. But, she was ready, it was in her eyes. I kind of think she was just holding on until Lilli came in from AZ for break, and that's okay, too. I posted a comment on the quilting blog that I may be out of touch dealing with this, and the comments back from "the girls' were so uplifting I could feel the support from all over the country.

And then I glanced at Shawnee's latest theme for a flirty apron swap, and I realized I had lied to my children when I said I was staying out of swaps for a while. The theme is "Martini Madness"-what fun for the new year! So, of course I registered, and will get my quilt blocks sewn and out in the mail so I can play with ideas for this one. I guess when I made my hair stylist a satin and organza apron for the holidays, I was just getting some practice-huh? 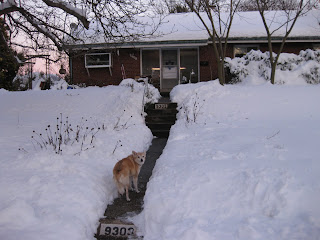 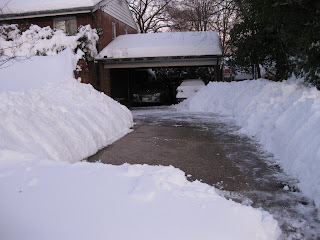 Here we have two pictures of the only things I have accomplished today. On the left is my lovely Miss Lucy, looking out from the carport. She is supposed to go to Lilli's appointments tomorrow, but if the county doesn't plow our street tonight, there is no way she will go, and Lilli will only go if Jack picks her up in the 4 wheel drive. On the right is our Violet, who is wondering why she can't frolic all over the front yard, why is that snow higher than she is?

But, the big question is: how many weight watcher activity points did that snow shoveling earn me today? 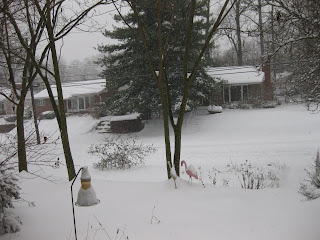 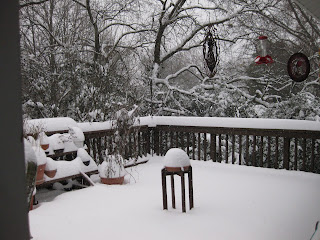 Yes, this is the South. We are a little over 12 hours into the snowstorm, the rate of "fall" has doubled since last night. Conservatively, we are expecting another foot to foot and a half before it moves on sometime late tonight or early Sunday. On the bottom is the view of our deck. On the top is the view out the front door; one can see that Eric and Erica chose the wrong tree to hide under since they did not fly home to Florida in time. Steps? we have them somewhere out there... After a filling breakfast of eggs and toast, I will go out with my trusty shovel and try to find them......
Posted by San-Dee at 10:03 AM 2 comments:

Hold on, it's coming"

We are getting ready for the mother of storms coming to our area. Since this is the South (we are below the Mason-Dixon Line) one expects it to be southern. Ha.
Right now the forecast is for 3-5 in. of snow tonight after 9 PM. Tomorrow, it is supposed to start snowing late morning, with an expected drop of 2-4 in. per hour most of the day. Add in winds and we could get some very interesting weather; right now the total snow expected is 15-20 in. depending on which news broadcast you lsiten to. I grew up in Ohio where people know how to deal with winter, here it's another story. The radio weather man said if this storm hits as expected, we will still be digging out on Monday. (Snow day from work? that would be cool). So this morning Lou and I made a list of stuff we needed for the house and I went out grocery shopping with a stop at the hardware store for ice melting stuff. It was not a pretty sight at Hardware City, it was only around noon and already people had cleared one shelf and were getting pretty nasty about the other two. Once I got to the grocery store, I couldn't believe how crowded the underground parking was-nobody ever parks down there. I never shop on Fridays so I asked my grocery clerk friend if the Safeway is always this crowded, and he said "No, it's because of the predicted storm. And this is nothing compared to how it will be when people get out of work and we start running out of things like milk and bread. You're smart to come this early."

So, I did the old Ohio stock-up of milk, cereal, batteries, etc. We are READY!!! I moved about one third of a cord of wood to the front stoop so it will be easier to get to if the power goes out and we need to use the fireplace as heat source, I have plenty of propane for the camp stove and we moved the wooden chairs off the front under cover so they won't get wrecked by snow.

So, if you don't see me here for a few days, it's not because I'm busy doing what I should be doing, it's because the power's out and we used up the laptop battery watching movies.

If you're in line for this storm, stay safe. Don't do anything stupid like thinking you can drive out there; you may know how to drive in the snow, but I can guarantee you that close to 95% of the other people who will be out on the road don't have a clue. If you're not in line, thank whatever power you want to that it's not coming your way. I'll keep you posted on the progress.... 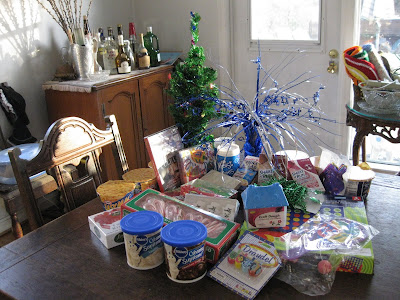 Here's what I'm sending out for my first participation in BakingGaLS. Be back later.

I KNOW there are other Jewish bloggers out there, but I don't seem to know where they are! So, I'm sharing with my reading friends. Chanukah (my preferred spelling) is considered a minor-hard to believe, huh?-holiday. It's a great story, recounting bravery, fighting and miracles. the Maccabees were victorious, the single vial of lamp oil lasted eight days, long enough to procure sanctified oil (or to make sanctified oil, depends on which story version you grew up with), and we get to eat great food. That's pretty tongue-in-cheek, but the story is simple: persecuted people ousted the oppressors, cleaned up the Temple, relit the light, and enjoyed a celebration. Now, some people try to equate it to Christmas, and I'm not about to go down that path, I'll share my feelings and thoughts....

When I think about Chanukah, I think of my mother hand grating all those potatoes for latkes. I think about oranges that my Uncle Itz ordered by mail for everyone in Cleveland. I think about the paper plate of cookies my Aunt Lill brought each family from Youngstown: with pineapple tartlettes, hermits and Grandma Riva's cookie press cookies. Of course the cookie press cookies were all colored and pressed in the Christmas shapes, but that's what came with the press so that's what the sisters' used.

When my children were young, we fashioned that base into our own traditions. Our extended family would come for dinner one night of Chanukah, we'd have brisket, latkes, poppyseed cake and lots of cookie press cookies. Debbie would bring spinach dip because that's what she makes best, Donna would bring 7 layer dip because that's what she likes best. I usually wear my Happy Challah Day sweatshirt-which really makes no sense since I never serve challah at the big dinner-but it has dancing dreidels and a menorah, so it fits.

But this year I have the "piece du resistance": blue velvety dreidel dellibobbers!! What a find! I will post pictures soon, and you all will be green with envy...hmmm, one of those Christmas colors, huh?

The important thread that weaves through these memories and traditions is family. My family is my grounding point, plain and simple. I make no excuse for loving them all to bits, it's the way I am.